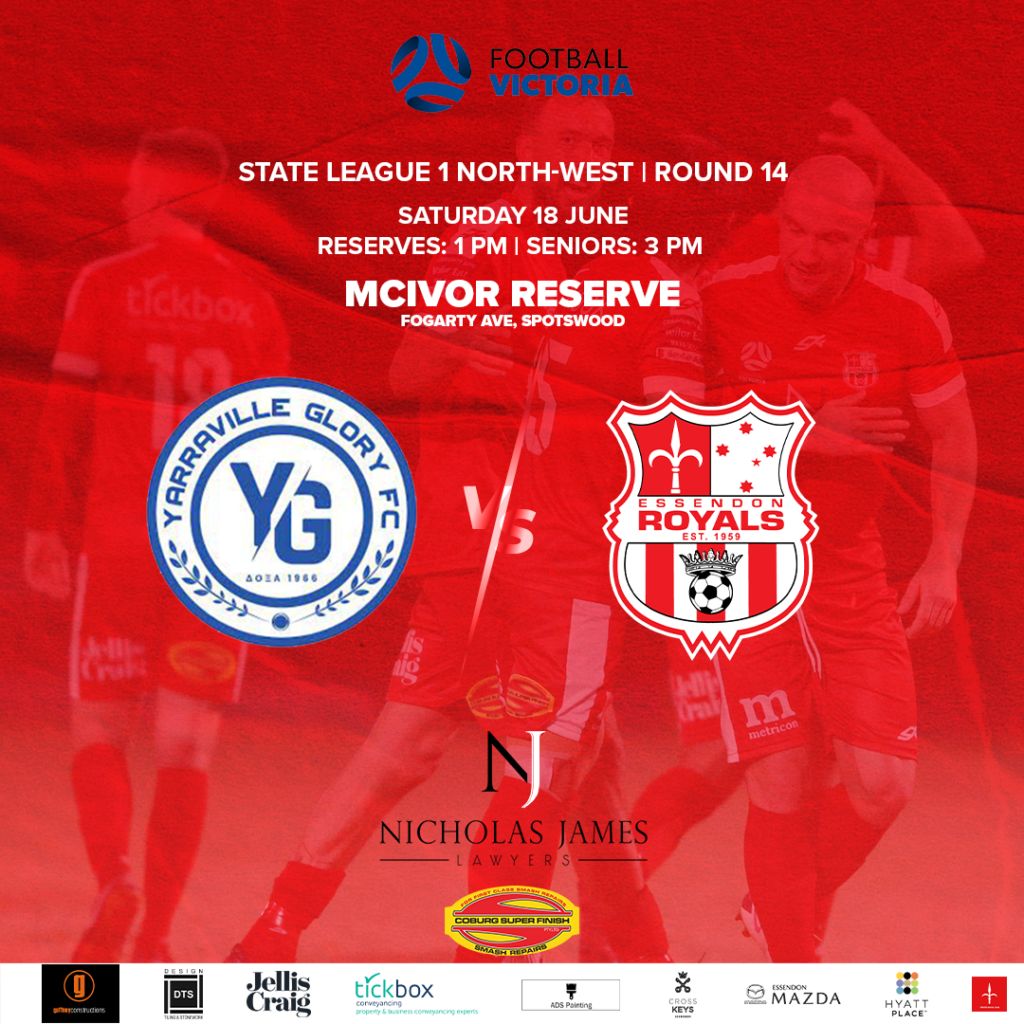 The Essendon Royals will be looking to maintain their best run of form all season when they make the trip to McIvor Reserve to take on Yarraville Glory FC on Saturday.

With the Royals on a streak of four wins from their last five games, including wins over (at the time) second-placed Banyule City and first-placed Caroline Springs George Cross over the last two weeks, Mick Ferrante will be looking to ensure the intensity the Royals bring to the marquee fixtures is carried into the trip to Yarraville.

The Royals have kept four clean sheets in the past five games, with their newfound defensive stability proving the cornerstone of their good run of form.

Matteo Ballan’s move to the backline has certainly helped the Royals performances in this regard, whilst German Schacht has been reliable when called upon.

Mario Piraino, Jake Montagnese and May Player of the Month Kristian Konstantinidis have also been strong performers at the back.

Goals have been hard to come by for Yarraville, which has experienced a tough run of results, winning just one of its last five games.

A win against Altona City in mid-May was the last time the Glory has tasted victory, with three losses and a draw following.

Over the last five games, the Glory has scored five goals, conceding 13.

Games aren’t played on the form table, however, and the Royals will remember their last visit to the venue last season.

After taking an early lead, the Royals fell asleep at the wheel and eventually lost 2-1, the winner coming from halfway in the last minute of the game.

Yarraville also gave the Royals a scare at Cross Keys Reserve in Round 3, where the 3-1 scoreline perhaps did not reflect how close the game was for much of the evening.

The game was tied at 1-1 as it entered the final 20 minutes, with goals from Ryan McEvoy and Graham Kelly eventually winning the game.

With the Royals one of three teams tied on equal third with Banyule City and Brimbank Stallions – who both suffered heavy defeats in the Australia Cup against NPL opposition midweek – and just one point off second-placed Sydenham Park, a win will be crucial to keeping pace with the front runners.

In the earlier kick-off, the Royals Reserves will be looking to continue their own fine form which sees them sit at the top of the table, despite having played a game less than their competitors.

Yarraville Reserves sit in eighth place on the table, with a record of 3-5-4 from their 12 games this season.

The Round 14 action gets underway on Friday night, with FC Strathmore hosting Caroline Springs George Cross.

Sydenham Park and Banyule City will play out what should be a fiercely contested match at Keilor Lodge Reserve on Saturday, whilst Brimbank Stallions travel to Keilor Park.

On Sunday, Whittlesea United and Altona City will see out the round at Mosaic Reserve.