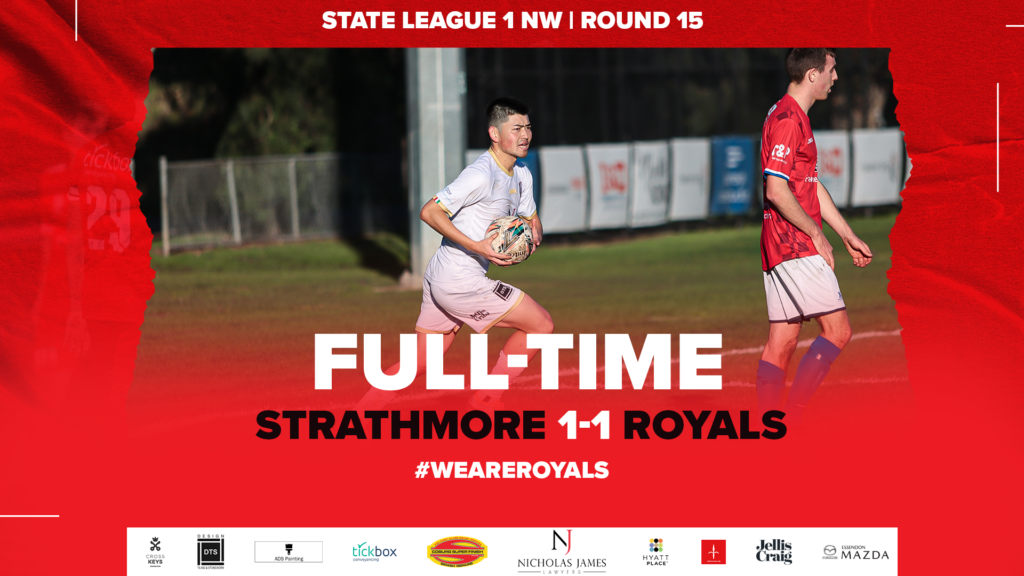 The Essendon Royals were forced to settle for a point at Strathnaver Reserve in a tense 1-1 draw against FC Strathmore on Saturday afternoon.

Nobuyuki Usui equalised for the Royals after Aashish Lama had put Strathmore in the lead after just 19 minutes.

The Royals also missed a penalty late in the first half, with Graham Kelly’s effort brilliantly saved by Strathmore goalkeeper Alan Neupane.

The Royals entered the game in league-best form, having won four games on the trot, including four clean sheets.

Playing on a small, heavy pitch, conditions were tough for both sides, but from kick-off the Royals looked comfortable in possession.

The first 15 minutes saw the Royals restricted to long-range shots, with Ryan McEvoy trying his luck on two occasions, whilst a Jake Montagnese ball almost found Kelly with Neupane quick off his line to deny the Irishman.

Strathmore took the lead in the 19th minute, courtesy of Lama, who was on hand to tuck home after the Royals were caught in possession whilst building from the back.

Usui almost equalised four minutes later, when a lovely through-ball from Ramzy released the Japanese forward, but the Strathmore defence did enough to force him wide, with the end shot an easy one for Neupane.

In the 32nd minute, Kelly, McEvoy and Van’t Schip combined beautifully to release Josh Markovski, who raced through on goal but wasn’t able to hit the target with his effort, firing over from a tight angle.

The equaliser eventually came via a lovely Markovski ball that split the Strathmore defence and found Usui charging through on goal, with the winger producing a cool finish to level the scores in the 41st minute.

Usui was proving Strathmore’s chief tormenter and on the stroke of half-time, won a penalty when he was quickest to a second ball in the box.

Kelly stepped up to take the spot-kick, striking it low and hard but denied by a fantastic save, ensuring the scores remained level heading into the break.

The second half proved a much more equal affair.

There were very few chances for either side. Chris Talajic forced a good save from Royals keeper German Schacht, before McEvoy had a strike from outside the box saved by the keeper.

Usui found himself driving into the box on the 70th minute but elected to cross instead of shooting himself. The resulting scramble was eventually dealt with as the Strathmore defence cleared it’s line.

The last chance of the day fell to McEvoy, who popped up at the far post at the end of a cross from Mario Piraino, but the ball was headed wide. In the end, the Royals had to settle for a point on a day they will feel they should have taken all three.