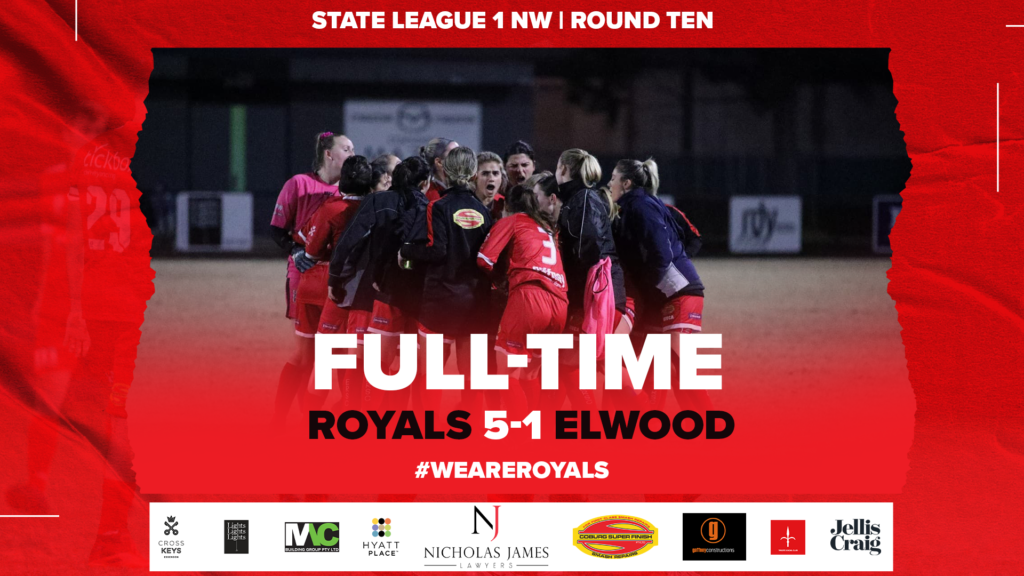 The Essendon Royals kept the pressure on their promotion rivals by claiming a 5-1 win over Elwood City on Friday night at Cross Keys Reserve.

Being the first to play in the round, the Royals had a unique opportunity to set the tone for their rivals ahead of a critical run of away games over the next three weeks.

Coach Vince Battiato said he expected a tougher challenge against Elwood than was provided back in Round One when the Royals ran out 9-0 winners, and true to his word the visitors arrived at Cross Keys hungry to prove a point.

Whilst Elwood was undoubtedly a tougher beat than last time, the Royals were still comfortable for the vast majority of the night.

It took just six minutes for the Royals to hit the lead, with Mary Hubeek opening the scoring after tucking away a rebound off the post from a Rachel Alonso shot.

In the 26th minute, the Royals went coast to coast with one full-back, the rampant Marie Rampal, delivering a delightful ball to the back post where her opposite full-back, Sarah Karlik was waiting patiently to tuck home.

Linda Sawa bagged a goal before the half was out to set up a 3-0 lead heading into the break.

The Royals did not have it all their own way, however.

In the second half, Elwood pegged the Royals back in the 58th minute, setting up a sense of intrigue for the remainder of the half.

However, the Royals were quick to awaken from their slumber and hit the back of the net in the 77th minute to restore the three-goal lead via a beautiful Alonso strike.

The win was sealed in the last seconds of the game via Katrina Tsalikidis, who scored on her return to the side to make it 5-1.

In the earlier kick-off, the Reserves set the tone for the evening, running out comfortable 10-0 winners, securing their spot at the top of the table for another week.