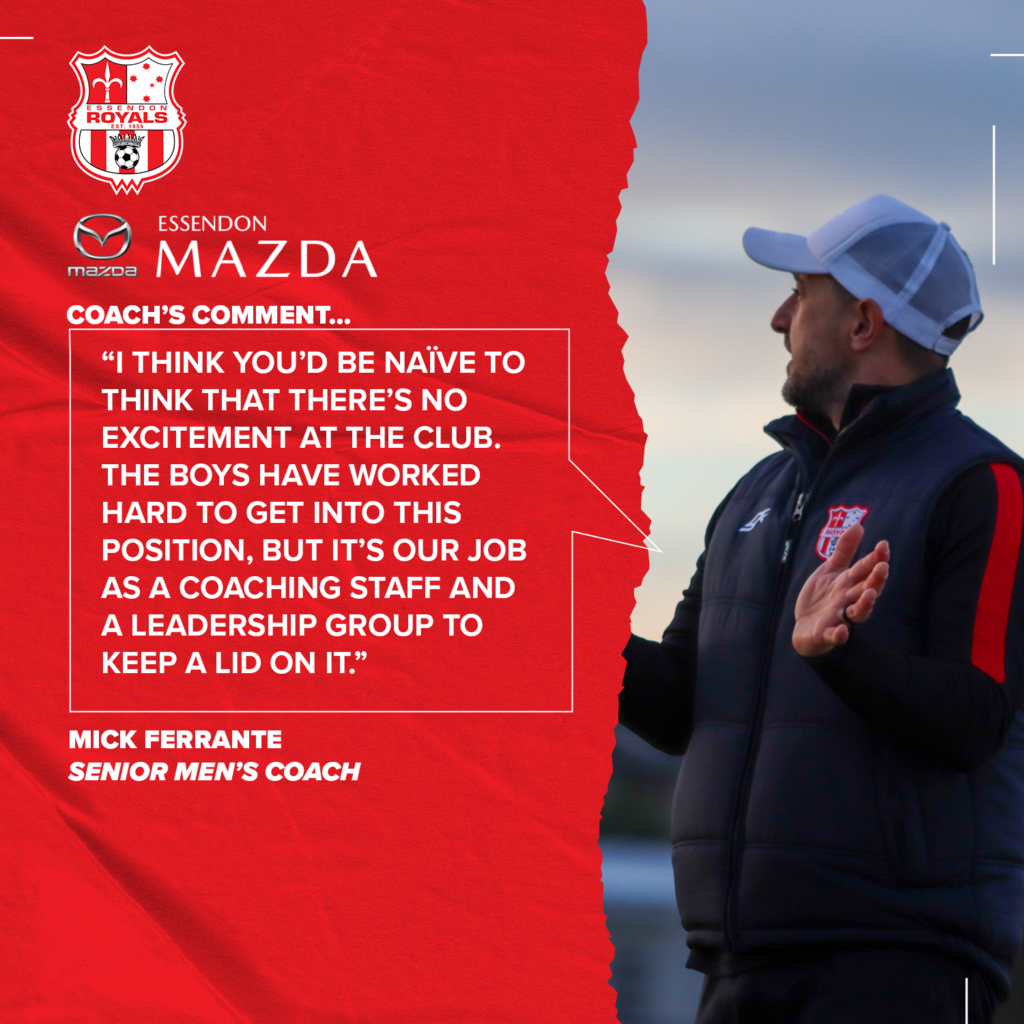 Essendon Royals Senior Men’s Coach Mick Ferrante says that his job is to keep a lid on the excitement bubbling under the surface at the club.

With just four games remaining, the Royals sit in second place, with a four-point buffer on third-placed Sydenham Park.

The Royals are in good form and have been playing good football, but as they have learned on several occasions this season, it only takes a brief lapse in concentration to cost you in this league.

With the Royals hosting a desperate FC Clifton Hill this evening, Ferrante is particularly wary.

“I think you’d be naïve to think that there’s no excitement at the club,” he said.

“The boys have worked hard to get into this position, but it’s our job as a coaching staff and a leadership group to keep a lid on it.

“We’ve learned the hard way at times that you take anyone lightly, and they will punish you.”

Ferrante said the late goal his side conceded against Corio SC last week was the perfect case in point.

“We played well last week. We dominated the game, and I was happy with how we played, but we missed a lot of chances, and when they scored a goal late on [to make the score 3-2 to the Royals], it becomes a nailbiter again,” he said.

“I was happy we responded straight away with another goal, but it’s a reminder for everyone about the importance of maintaining our focus.”

With tonight’s opponents desperate for points to avoid relegation from the division, Ferrante said this was the season’s biggest game.

“The next game is the biggest game because as long as we are in the position we are in, it’s all up to us,” he said.

“We don’t have to rely on anyone else at the moment, and that’s how I want it to stay, so my focus is only on that next game.”

Ferrante, who stepped into the senior coaching role at the 11th hour this season, said he has enjoyed the experience.

“It’s a different feeling than playing, but it’s been a very enjoyable experience,” he said. “You need to be a leader amongst men, and you’re faced with making decisions that affect other people’s lives and careers, but I’ve enjoyed it, and I think it’s been easier because I’ve been a part of this group for the last few years.”