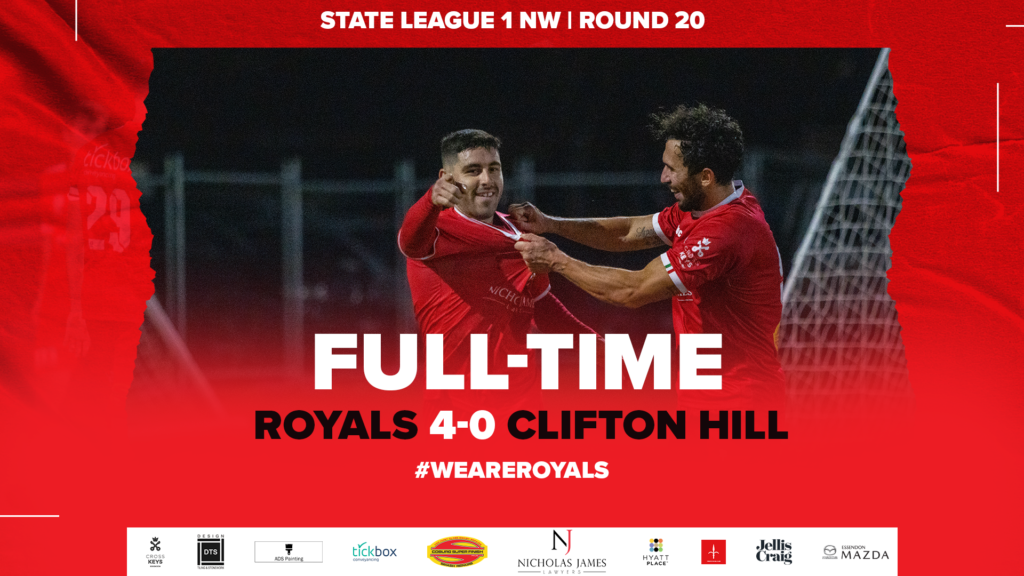 A trademark stunning strike from Ryan McEvoy opened the scoring in the first half before the Royals scored three in a storming second half via Graham Kelly and Mario Piraino, who finished with a brace.

Royals coach Mick Ferrante named an unchanged line-up as he focused on an important three points against the bottom side in the league.

The Royals started the game well, winning the ball directly from the Clifton Hill kick-off in what proved a sign of the intensity to come from the home side.

Davey Van’t Schip had the first shot on target after just two minutes, after Luca Santilli retrieved possession deep in the Royals’ attacking half, but the Dutchman’s effort was well-saved.

Santilli had a great chance of his own in the 12th minute, meeting a cross from Nobuyki Usui from the opposite flank but was unable to direct it into the back of the net.

McEvoy scored the opener after 16 minutes with another moment of individual class, reacting quickly to a poor clearance and striking the ball superbly past the helpless keeper from outside the box.

Kelly had a chance to make it 2-0 when he raced through one-on-one with the keeper, but he just couldn’t find the finish past the on-rushing keeper.

Clifton Hill fought back well after conceding and had some great chances which, but for some brilliant goalkeeping from German Schacht, could have seen the visitors enter the break 2-1 up.

With his clean-sheet intact, Schacht’s saves served as a reminder to the Royals of what was at stake in this game, and they came out firing in the second half.

Two minutes after the restart, Kelly scored the Royals’ second of the game when he put the finishing touches on a sublime team move.

Luca Simeoni played the crucial ball that cut through the Clifton Hill defence to find the run behind from Usui, who cut it back to Kelly for a simple finish.

Piraino scored his first in the 51st minute, proving the hungriest in the box to get to a Will Abbott flick-on from another quality McEvoy set piece.

The defender scored his second of the night and fifth for the season in the 87th minute when he rose highest at the back post to nod home a brilliant McEvoy corner.

The win puts the Royals seven points clear of third-placed Sydenham ahead of Saturday’s games and in a commanding position with just three games to play.

In the earlier kick-off, the Royals Reserves won a tense game 2-1.

Captain James Grasset put the Royals 1-0 up after 35 minutes via a spot-kick.

The visitors looked to have stolen a point when they equalized in the 80th minute, but substitute Marcus Medina proved the hero, scoring the winner with his seventh goal of the season in the 82nd minute to seal the points.

The win puts the Reserves temporarily on top of the ladder ahead of Saturday’s games.