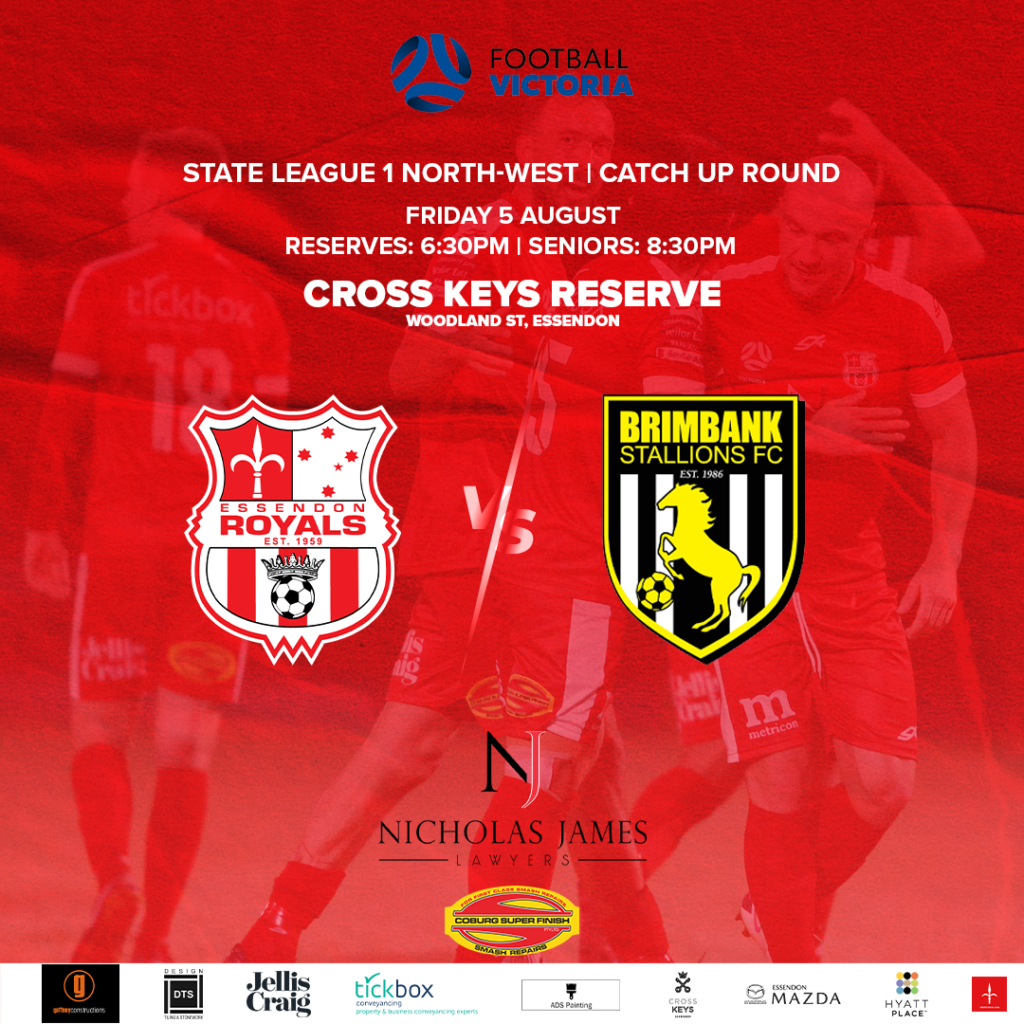 Whilst the majority of the league takes a break this weekend, the Essendon Royals will be one of four teams playing catch-up games in Men’s State League 1 North-West.

The Royals welcome Brimbank Stallions to Cross Keys Reserve, to make up for the postponed game back in Round Seven due to the waterlogged pitch.

The match is of crucial importance to the Royals, who will be looking to establish a seven-game buffer on third-placed Sydenham Park.

The Royals will have played a game more than Sydenham – who have a catch-up game to play against FC Strathmore at some point – however with just two games remaining (three for Sydenham) – it’s the sort of lead that would be difficult to rein in.

Of course, the challenge Brimbank presents will be another monumental test of the Royals promotion credentials.

Mick Ferrante’s men had to battle back from a 1-0 deficit at half-time to take a 2-1 win at Club Italia just three weeks ago.

Nobuyuki Usui scored the winner with a bullet header in a win that provided the Royals incredible momentum moving forward.

Since, the Royals have scored another eight goals in two games, defeating Corio 4-2 and FC Clifton Hill 4-0 last week.

Brimbank has fallen behind the promotion pack and with just nine points left to play for, are 10 points behind the second-placed Royals.

Whilst they have little to play for themselves, the Stallions would relish the opportunity to help shape the promotion race by taking points off the Royals.

Essendon will prove tough to beat, however. Boasting the second-best goalscoring and defensive records this season, Ferrante has certainly gotten a tune out of his side this season.

In the earlier kick-off the Royals will need three points to maintain their title charge.

The Royals trail the league leaders, Corio, by three points but have a game in hand, courtesy of the abandoned game against Brimbank Stallions back in Round Seven.

The Royals need the three points to take back top spot with two games to play.

While the Royals and the Stallions meet at Cross Keys Reserve, our fellow Moonee Valley club FC Strathmore will be hosting league-leaders Caroline Springs George Cross.

Strathmore remains in a relegation dog-fight, despite having two games in hand on FC Clifton Hill, however they need the points from their catch-up games against first-placed George Cross and third-placed Sydenham Park to sure up their position in State League 1.

George Cross certainly won’t be short on motivation, needing the win to inch closer to the league title.

With promotion already assured, courtesy of a nine-point lead over third-placed Sydenham Park, a win on Friday night will just about secure the title, depending on events at Cross Keys.