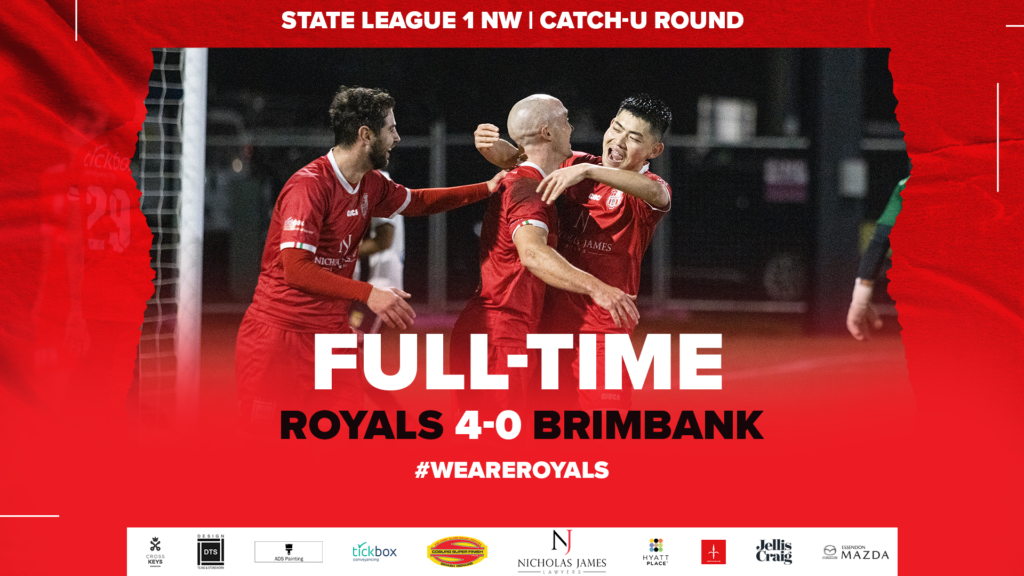 The Essendon Royals were at their dominant best in an impressive 4-0 win over the Brimbank Stallions at Cross Keys Reserve on Friday night.

An absolute belter from Mario Piraino broke the deadlock as the Royals spurned chance after chance in an opening 20 minutes before the goals came flooding through for the remainder of the game.

The win was sealed by further goals from Graham Kelly, Matteo Ballan and the unmarkable Nobuyuki Usui.

Essendon is now seven points clear of Sydenham Park, which now has a game in hand on the Royals.

The Royals need two points from their remaining two games to seal promotion to NPL3.

Mick Ferrante’s side was once again hugely impressive, building on a solid performance last week against FC Clifton Hill and bettering it against one of the league’s better sides in Brimbank.

The Stallions had few answers to the Royals’ intense press and attacking runs, with Usui in particular proving a potent threat going forward.

The Japanese forward who scored the winner against Brimbank last time these two met could have had a hat-trick in the first half if not for the efforts of Chris May in the Stallions’ goal.

Usui forced a great save after 15 minutes before an effort from Kelly was cleared off the line.

Luca Santilli had a good chance after 22 minutes but couldn’t find the back of the net before Usui saw another great shot well-saved after 26 minutes, eventually missing the target after 34 minutes.

The goal eventually came from Piraino, who scored his third goal in two games when he struck home a lovely half volley from 25 yards out.

The ball sat up beautifully for the marauding full-back, who took no prisoners with a looping strike that left the Stallions’ keeper stranded.

With the goal finally scored, the Royals never looked like taking anything less than three points.

Kelly made it 2-0 five minutes later, putting the finishing touches on a beautiful team move after being played in by Luca Santilli, setting up a healthy lead for the Royals heading into the break.

After the restart, Ballan made it 3-0, heading home in the 47th minute from a corner.

The Royals looked comfortable throughout the remainder of the half but were forced to wait until the 86th minute for the fourth.

Usui picked up the ball on the left wing and pulled off a stunning solo raid to find the back of the net and seal a comfortable win.

The result puts the Royals in a commanding position in the promotion race, and a win next Saturday at Keilor Park would seal the second spot for the Royals.

The Reserves game was called off by the referee who held concerns that playing the game would ruin the pitch for the Senior game.

The Reserves will now take on Brimbank on Tuesday evening.