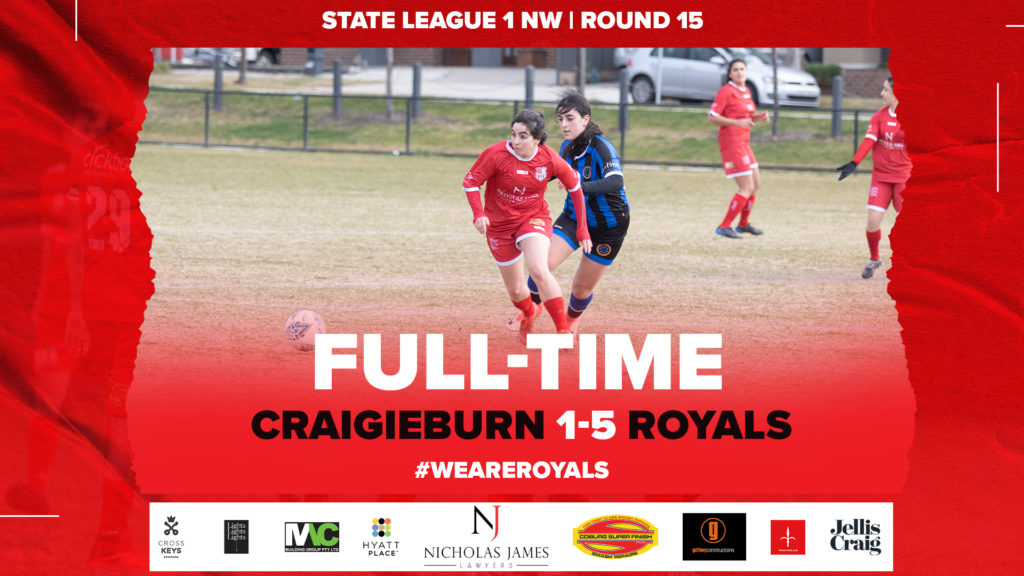 The Essendon Royals State 1 Women continue on their winning ways with another convincing display in blustery, gale force conditions at Aston Fields with a comprehensive 5-1 win over the much improved Craigieburn City.

With the wind in their faces in the first half, the Royals had to keep the ball on the deck to control the tempo of the match, and it didn’t take long for the chances to start flowing; an early header from Mary Hubeek going over the bar.

As the minutes ticked over, the Royals continued to dominate the play; Craigieburn sat very deep and compressed the area in the Royals’ front third, making it difficult for them to find the right final pass despite breaking the line on multiple occasions.

They finally broke the deadlock on 27 minutes through a familiar source, punishing winger Marie Rampal on one of her customary runs down the right, finding the space for a cross which bounced off a defender, only to fall kindly for Hubeek to bury it past the keeper.

Royals doubled their advantage in the 34th minute with strike partner Rachel Alonso getting on the scoresheet, another Rampal crosses, and a clever finish on the turn after brilliant lead-up work from Annabelle Hosking to send Rampal through.

And Royals made it 3-0 just minutes later when Alonso netted her second; this time from the left side, latching onto a precise Sarah Karlik ball; 3 first-half goals in 10 minutes set up the foundation for another win.

But the first-half scoring was not done; Hubeek and Alonso combined on the stroke of halftime to make it 4-0; Hubeek netting her second.

The second half saw the conditions worsen, and with the wind in their back, the Royals struggled to come to terms with the ball running away from their strike team; the blustery conditions made it difficult to create clear-cut opportunities. But that didn’t stop them from making it 5-0 on the hour mark; Linda Sawa, slotting home nicely from 10 yards after Hubeek’s clever flick from another Rampal foray down the right.

But despite the difficult conditions, the hosts still had a say in the proceedings, latching onto a defensive slip-up in the 77th minute.

An early cross-in saw young Ambrosini crash it home the first time, giving the Royals keeper, who was at full stretch, no chance.

A wonderfully taken goal. No more goals, but a polished first-half performance set up the victory, sending the Royals Women one step closer to promotion with just three matches to play. In the earlier match, the Royals Reserves continued their perfect season, going 15 wins from 15, with a 14-0 victory against their counterparts.

A win in their next match should be enough to secure the Reserves Championship.